What we historical fiction writers dream about are sources informing us of exactly what we need to know in order to write our story.  Mostly, we don’t lack sources on major political events, because these are easy to find, but details of everyday life, precise details synchronised very exactly in time, without which our novel feels unrealistic and unconvincing, and plots and characters fall apart.  These things are particularly hard to dig up – sometimes literally, in the archeological sense.  What we know about how people lived in centuries long ago is largely down to chance.  For example, much of our knowledge about how Romans lived their lives derives from what was buried under molten lava when Vesuvius erupted in 79 AD.

I am currently preparing to write a school story, of the traditional sort, based at a girls boarding school in the first half of the twentieth century.  How wonderful it is, therefore, to find a book like ‘A Terrible Tomboy’, which is not a novel at all, but more a succession of events in the life of a pre-teen girl living in genteel poverty on the English-Welsh borders in the 1900s.  (I have already reviewed author Angela Brazil’s autobiography.)   This was Angela’s first publication and, although she later became known as the first writer of school stories for girls, this was not one of them.  Prefixing every chapter with a highbrow literary quotation, Angela describes everything as she sees it, the landscape and what grows on it, how people ran their households, how schools were run, what they wore, what tools they used and how, attitudes and opinions, what people enjoyed and valued.  Of course, primary sources like these can be subjective and need to be balanced against others, but Angela never tries to deceive, embellish or even gloss.  She writes with that mixture of innocence and confidence redolent of someone living in the Britain during the time of the British Empire, on which the sun would never set – obviously.

It was a world in which twelve year olds were generally at peace with their world and their likely role within it.  Peggy Vaughan (the terrible tomboy in question) and her brother Bobby, without the distractions of electronic media, not even television or radio, liked nothing better than their pets and to play outside, spotting wild flowers, and also wild birds and insects… which they would then capture and stick on a card.  The underlying point of view was that the natural world was wonderful and exciting, but theirs for the taking.  Although The Abbey, where they lived, was falling down around them and their poor father was struggling financially, being saddled with debts and mortgages incurred by profligate ancestors, they were Vaughans and better than those around them – better, however, in the sense of having higher moral standards.   These are attitudes which we in the twenty-first century, not only do not share, but regard as repugnant, and we find it difficult to write characters who think this way.  Nevertheless, in my opinion, we must, because that’s how it was.   What I cannot stand is right-on, politically correct modern opinions emanating from the mouths of people, albeit fictitious people, living many decades or centuries earlier.  The worst example ever was in a Children’s BBC programme I watched in the 1990s which included a girl knight.

Notwithstanding all these things – or maybe because of them – ‘A Terrible Tomboy’ is a wonderful resource for writers of historical fiction.  I have often considered setting up a resource-bank, of things I have experienced, things I have heard my parents talk about, and other people I have met, and I would hope to gain insights from other people’s experiences as I needed them for my writing.  To give an example, everyone knows that GIs billeted in England during World War 2 caused havoc amongst local British girls, but my mother used to tell me about how shy black American soldiers were at dances and that, if she danced with one, all his black friends would line up to ask to dance with them.   It’s these sorts of details that can make a historical piece real.  I thought about writing my next post about British elections, setting down everything I observed from voting myself, watching election results and being a poll clerk and presiding officer.

Another thing I have learned about researching historical topics is the value of images.  A picture truly can tell a thousand words.  Even when browsing for an image to go with this blog, I found a wonderful resource on early twentieth century schoolgirls.

Back to ‘A Terrible Tomboy’, if you wish to consider it as literature, it has no real storyline and the one bit of plot at the end is implausible, but, given the tone of the rest of the book, very predictable.   Enid Blyton, many decades on, wrote the same sort of stories, with defined characters and plots that worked.

I was about to start this post by reporting that this book must be out of print.  I actually found it for £3 on a secondhand bookstall in St Mary’s Market, Cambridge.  However, I am very heartened to learn that it’s still very much out there, and available to purchase from World of Books and also obtainable to borrow from WorldCat.org.

So who was Angela Brazil? Why is she important? Why is someone bothering to read and review a biography written in 1976? Especially when she is on holiday. Is it the rain pouring down from the Alps, or the parties of bored Austrian teenagers doing karaoke in the bar across the road, in German, to songs I’ve never heard before, and never want to hear again? To all of this, I can honestly answer No… apart from never wanting to hear karaoke in German again.

Angela Brazil wrote school stories for girls, beginning at the turn of the 20th century and was still writing at the time of her death in 1947. As a pre-teen, I lived and breathed school stories: Mallory Towers, St Clare’s, The Naughtiest Girl in the School, the Chalet School series (all 60 of them!) and many, many more. My mother recommended the Chalet School, and Angela Brazil, but, whereas I was readily able to obtain copies of the former from the local library, I never really embraced Angela. I do remember bundles of hardback Angela Brazil books with their faded red and yellow covers, at the bottom of my mother’s wardrobe, below the folds of her flowing New Look dresses, but – children are funny things – I was put off by their general dusty smell and ‘old’ feel. I think I read one; it was about a girl called Nesta, who was adopted by her mother’s rich, childless friend, then returned to her real mother (‘Nesta’s New School’, which is still available on Amazon).

‘The Schoolgirl Ethic’ recounts the very full life of Angela Brazil: not just a writer, but a naturalist and painter, philanthropist, antiquarian, and local dignitary in Coventry, where she lived for most of her adult life. She studied the schoolgirl frame of mind by involving herself in every sort of activity which involved young people in her city, becoming a benefactor to local schools, involving schoolgirls in her new museum and giving massive and elaborate children’s parties. She never married, living, as single, middle-class people did in those days, with her elder brother and sister. The author implies, several times, in so many words, that Angela never actually grew up, that she was a perpetual schoolgirl. Maybe she was on paper, but, in real life, she was grand and domineering. Local poet, Abe Jephcott’s tribute to her after her death (quoted at the end of ‘The Schoolgirl Ethic’) begins like this:

‘At the head of the grand staircase
She received me.
Angela…
Ah! She stood as a statue would
New found in huge Isles of Greece,
Enrobed in gold and jewelled fold
Of emerald green and bright cerise.’

It is clear that her biographer, Gillian Freeman, didn’t like her subject very much, although her analysis of Angela’s work, and of the times in which she lived, is thorough and insightful. She quotes frequently and knowledgably from a wide range of Angela’s books, although sometimes her text is confusing to follow, because the layout on the page makes it difficult for the reader to work out whether he/she is reading a quote from one of Angela’s books or Gillian’s commentary. Also, she doesn’t cross reference fictional characters and real life personages enough; one is left wondering sometimes who exactly is the ‘Mildred’ or ‘Dotty’ about whom she is making such a strong point.

From a social history point of view, this biography is a valuable resource on life in England in the first part of the twentieth century, how people lived, their emotions, standards and attitudes. What Gillian only touched upon was the fact that education for girls was only just beginning at the time Angela was writing; it was both ground-breaking and a novelty for young girls to be together, away from home and able to get up to ‘jolly japes’ like their brothers. Her next point, however, was well-made, that Angela’s world view was otherwise old fashioned, even at the time she was writing it, that Picasso, the Bloomsbury Group, fascism and communism had all wafted over her.

Gillian also discussed in detail the physicality between the girls and their teachers, and their extravagant language, how they frequently referred to being ‘in love’ with a friend. Moreover, one of Angela’s heroines was named ‘Lesbia’. But Gillian knows and understands her subject, and the age in which she lived, well enough to recognise innocence and naivety. Women in the nineteenth century (the era where Angela belonged) did have very intense friendships and used very emotional words.

Well, dear Reader, are you still with me? Sorry this post is so long. Do I recommend this book – yes. Did I enjoy it, on a personal level – yes. More than that, though, I believe that Angela Brazil is very important in literature and in women’s literature in particular, because she wrote the first proper school stories for girls. Everything that came after – your Enid Blyton and your Chalet School, possibly even Harry Potter – developed the theme that Angela began, even if we haven’t read her output.

Please bear with me a bit longer, if you can. One of the reasons I’m now in Austria, in the Tyrol, close to Innsbruck, is because of Elinor Brent-Dyer’s Chalet School, which started off here. I can confirm that the area is every bit as beautiful as Elinor said it was and, after a bit of Googling, I discovered that Elinor has a memorial in Pachenau, which is close to here, and also that there is an organisation called ‘Friends of the Chalet School‘.  They don’t make school stories like they used to. 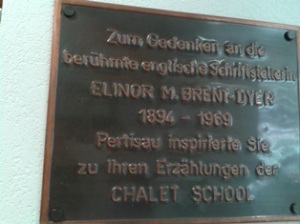 Plaque to Elinor Brent-Dyer in Library in Information Centre at Pachenau, Austria.