Having rubbished Alan Bennett’s ‘The History Boys about a year ago, when I read the play and went to see it at the theatre, I was dismayed when my lovely aunt in Canada pressed a copy of Bennett’s ‘The Uncommon Reader’ into my hands, saying how much she had enjoyed it. However, I could see that it was a slim volume (124 pa

“You don’t read proper books,” said my One and Only Husband, when I started reading. True, darling, true, I don’t normally, and one of our jobs on my retirement will be to clear out the many paperbacks which we have both read 10, 20, and many more, years ago and which we will never read again. We will have to offload them on to unwilling charity shop, who will probably send them to be pulped. This is the main reason I read everything on Kindle. Btw… Ssh…over this holiday One and Only has started reading from the Kindle app on his iPad.

Back to ‘The Uncommon Reader’. The premise of this short novella (first published 2006) is that our Queen (Queen Elizabeth II) gets into readin

g in a big way, thereby neglecting her royal duties, also acquiring insights into political matters on which she had normally been prepared to accept the advice of politicians and courtiers. The story starts well with the royal corgis running into a mobile library van in the grounds of Buckingham Palace and HMQ taking out a book by Ivy Compton-Burnett just to be polite. The best parts of it concern the machinations of equerries and civil servants, jostling for position between themselves, but all determined to nip the Queen’s new hobby into the bud, for no better reason than that she had never read much before and they were used to her old ways. Other members of the Royal Family don’t figure much, except for occasional short appearances by Prince Philip who is depicted – guess how? – as a grumpy old man. (No surprises there, then.) The end of the book was enigmatic. I think I understand it.

I always have reservations about fiction which includes real people, especially people who are still alive and when they have major roles. Sue Townsend’s short, supposedly humorous, work, ‘The Queen and I’, in which the Royal Family were turfed out of its palaces and put on a council estate in Leicester, was similar, but not at all funny, merely a whinge by someone who resented the Royals having more than she did. Bennett, however, wrote about HMQ wit

h gentle sympathetic humour (nothing laugh-out-loud), intimating that the Queen was wiser than those around her. He developed for her a character of his own, which may or may not be accurate, but was gentle and respectful – yes, I know, an unusual adjective for a twenty-first century author – but all the more effective for it.

Bennett’s English style, btw, is not vivid or par

ticularly fluent and on occasions it jarred. For instance, this is the opening sentence. ‘At Windsor it was the evening of the state banquet and as the president of France took his place beside Her majesty, the royal family formed up behind and the procession slowly moved off and through into the Waterloo Chamber’. His style was wordy, with lots of long sentences, joined by ‘and’. Get that past your writing circle!

So what did I say to my lovely aunt this morning when I gave the book back? She’s a very direct lady, who doesn’t do flannel but does do plain speaking. I told her unequivocally that I enjoyed it.

The photos are of Canada, nothing at all to do with Alan Bennett of ‘The Uncommon Reader’.

Well, Dear Reader, here I am reviewing ‘The History Boys’.   I’m sure everybody else  has seen the film.  I don’t do films.  (Unlike one of the characters in THB who was instructed to say he enjoyed ‘film’.  Another character inevitably asked him if there was only one movie he liked!) 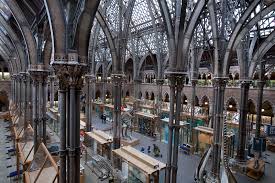 ‘The History Boys’ should have pressed all the right buttons for me, seeing as it was about grammar school boys being prepared for Oxbridge exams in the 1980s.  I was a grammar school girl myself and I applied – in vain – to Oxford in the 1970s, to read history actually.  (My father, who had attended Cambridge at the time when you could just pay to go there, wanted it, and I was never particularly bothered.  Manchester suited me fine.)  The boys’ preparation was carried out by Mr Hector, who rides a motorbike and affects eccentricity and touches up the boys, and Mr Irwin, modern, serious and ruthless.  There were parts of it that were witty, and many more which were iconoclastic, particularly the idea that to get into Oxford or Cambridge you had to stand all accepted viewpoints on their head and argue the opposite, in order to stand out from the rest.  For example (I quote from the text):  “The Holocaust… it has origins.  It has consequences.  It’s a subject like any other.”  Although the two schoolmasters came out as distinct characters, the boys all blended into one, and there was only one female character.

Did I enjoy reading this?  Not particularly, although I was aware that it was well-written and thoughtful.   Did I laugh?  Not once, Dear Reader (although I think I was supposed to).

Tomorrow I go to see this play performed at The Mercury Theatre in Colchester.  Why didn’t I wait and see the performance?  You may think my answer strange but this is it.  Because I don’t like surprises.  I wanted to know what it was like beforehand, so that, if there were parts of it I found demanding, I could work through them in my own way.   This is why I don’t like film…s.  I don’t want some actor doing all the interpretation for me.  I love (reading) Dickens, but I find dramatisations of his work all wrong, too dramatic, hamming up the gory and unpleasant bits (like the catch in ‘Magwitch’s’ throat in ‘Great Expectations’) to the extent that you can’t follow the story.  Dickens always knew how far to go, whereas many other writers will wring the last drop of emotion from the reader.  Why should we enjoy being made to cry?   I don’t.   Am I alone in this?

When I’m writing,  I am in control.  I know how far I’m going to go with the horror, tragedy and emotion.